uhhhh … Everyone can draw

Some are technically (in terms of technique) better. Some worse. Many who can’t really draw that accurately still manage to communicate visually.

I was lucky growing up: Supportive Mom. Perhaps some latent talent. Above all else: The compulsion to just do it.

When talking with fellow adults about “being an Artist” (notice the capitalization), I sometimes observe:

“When you were a little kid – Did you draw?” (Everybody raises their hand. Literally everyone. Of course) Okay – So what does any of this have to do with “UI Design”? You cannot expect to replicate the digital exactness of an html page. But you can communicate the dance of interaction with a sketch.

In this Non-Profit Site Redesign I captured some of the basics of a complex digital layout with sketchy styling. 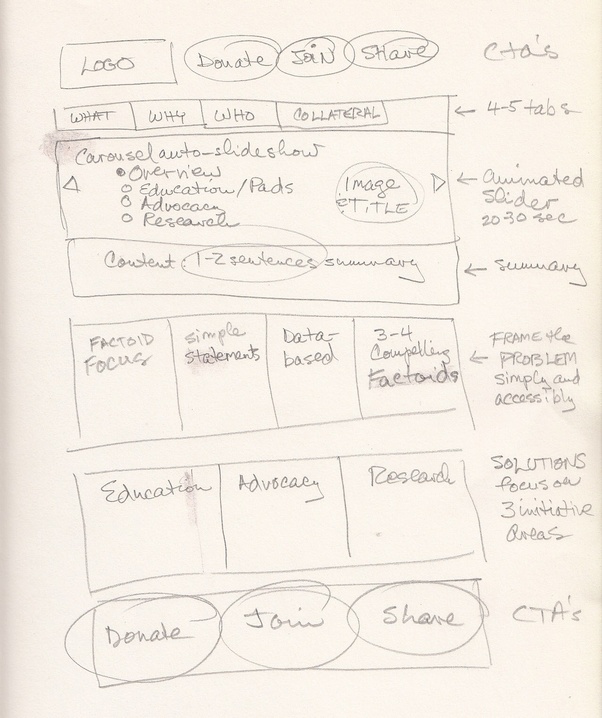 Kudos to LinkedIn colleague Piotr Kulaga for these insights:

“Yes, early conceptual sketching is very different from working on specifics some explicit form. It aims to get ideas out of one’s head, including the ambiguous and those which aren’t well defined. In effect, sketching to communicate things and in the process open them to reflections and interpretation, by others and self, ahead of ‘representing’ anything concrete, is the key.

The rougher the better, because it will be more likely to ‘invite’ refinement and amendments, rather than intimidate. For preliminary sketches to be really effective, people shouldn’t feel that their contribution may ‘spoil’ a scribble at hand, including one’s own. In a way, artistic flair is more likely to get in way of ‘working’ on a sketch, than it is to ‘nail’ anything that isn’t tangible otherwise.

Indeed, if one ‘knows’ what is to be sketched, the raw idea sometimes proves more productive when described in words. A solution to the ‘problem’ is best resolved through analysis of desirable functions, corresponding behaviours and structures supporting the emerging hypothesis, rather than finding a complementary form. In fact, a premature compelling ‘form’ may actually detract the process from identifying the nature of what we are dealing with.”